My statement on today's incorrect release from IPSA. UPDATED

My statement on today's release from IPSA: UPDATED*

This figure quoted by IPSA in today's release is entirely incorrect and they have now accepted this.

The matter refers to a disputed payment which I raised with them in January seeking a resolution.

On 9th March I made clear this issue needed to be resolved and requested a meeting with the person ultimately responsible for the incorrect figures.

I was informed on 12th March by IPSA via email that the matter was closed and received an apology for their incorrect figures.

I am therefore extremely disappointed to have been incorrectly named on this list.

IPSA have now accepted that mistakes were made and the matter has now been resolved.

IPSA will be updating their website to this effect later today.


Update:
Late last night I received an apology from the Chief Executive of IPSA for the mistakes that IPSA had made.

"I accept that, in all your dealings with IPSA, you acted in good faith, believing that sums owing had been repaid. You now no longer have any sums outstanding from 2014-15." 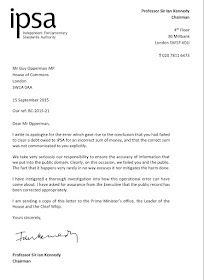